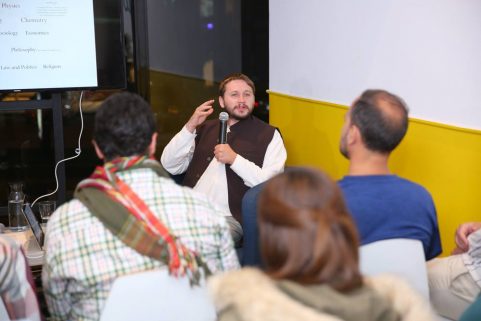 A lecture organized by Tabah Foundation was given by Mr. Hassan Spiker, researcher in Islamic philosophy logic and mysticism, in Cairo on April 2017.

Many natural scientists today believe that their disciplines are objective, universal, neutral and value-free, and that their truth claims are completely independent of any form of philosophy. Moreover, although the claims of positivism were decisively discredited long ago, many contemporary scientists and science enthusiasts still believe that physics, chemistry and biology are the only sources of real knowledge, leading them to claim that the true answers to metaphysical questions, like that of the existence of God, cannot possibly be known – or even that such questions are meaningless.

However, the popularity of this type of scientism is particularly surprising when one considers the consensus amongst even mainstream modern philosophers that physical science, far from being capable of dealing with all questions, accounting for all aspects of reality, or providing the basis for all forms of objective truth, actually has to assume a great many of its first principles, and cannot itself ‘prove’ a great many of the facts that it must accept in order to be able to operate. Indeed, in order to do so, it must employ another discipline, historically considered the most scientific of the sciences: metaphysics.

The talk, moderated by researcher  Ahmad AlAzhari at Tabah Foundation,  considered something of the history of the relationship between metaphysics and the natural sciences both in the West and in the Islamic world, and arrived at answers that would be of crucial importance to contemporary debates about the scientific status of the traditional Islamic disciplines.