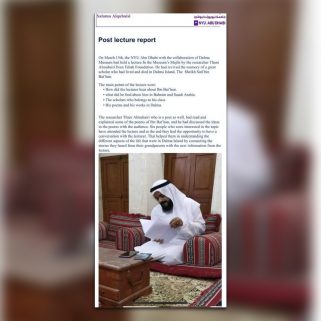 On March 15th, the NYU Abu Dhabi with the collaboration of Dalma Museum had held a lecture in the Museum’s Majlis by the researcher Thani Almuhairi from Tabah foundation. He had revived the memory of a great scholar who had lived and died in Dalma Island, The Sheikh Saif bin Bat’han.

The Main points of the lecture were:
– How did the lecturer hear about Ibn Bat’han.
– What did he find about him in Bahrain and Saudi Arabia.
– The scholars who belongs to his class.
– His poems and his works in Dlama.

The researcher Thani Almuhairi who is a poet as well, had read and explained some of the poems of Ibn Bat’han, and he had discussed the ideas in the poems with the audience. Six People who were interested in the topic have attended the lecturer. That helped them in understanding the different aspects of the life that were in Dalma Island y connecting the stories they heard from their grandparents with the new information from the lecture.

The Understanding Extremist Violence in the Middle East and Beyond Symposiu...