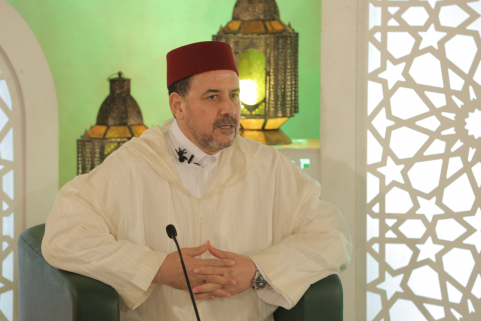 In the context of its genuine interest in reshaping contemporary Islamic discourse and providing research and consulting services in Abu Dhabi, the Tabah Foundation hosted Prof. Dr. Ahmad Abbadi, the Secretary General of the Muhammadiyah Association of Scholars in Morocco, who gave a lecture in the Tabah Intellectual Tent, titled “The Moroccan Experience in Restoring Religious Discourse to its Authentic Approach”.

In his beneficial and interesting speech, Dr. Abbadi described this experience as a story of crossing from an intellectual geometry to restoring equilibrium to a state of flux, order and authenticity, with renewal in religious speech, inseparable from its purposes, objectives, approaches and programs. It is a six-dimensional geometry that begins with Guardianship (walayat al-amr), the tasks of which include being decisive in establishing peace; the Supreme Scientific Council, which branches out into numerous scientific boards and is concerned with giving guidance according the adopted and followed rules and Fatwa, headed by Guardian to ensure compliance to the set rules. These scientific councils oversee the sustainable development of Imams and prepare them along the lines of the Charter of Scientists’ plan. Additionally, such councils oversee the lessons given in mosques in order to monitor them and maintain control.

Scientific councils supervise all the Sharia institutes and they are entrusted with reviving the al-Qarawiyyin, in addition to considering the context and the areas it covers, hence conducting ongoing contextual studies which care for the religion’s legitimate and realistic dimensions.

The Muhammadiyah Association of Scholars in Morocco was assigned massive tasks across 21 research units, including units dedicated to combating extremism, others for addressing various deviant behaviors, capacity-building and preparing a homogeneous generation of intellectuals and scholars in accordance with formative guides. This is in addition to the “Board & Pen” unit, which cares for children and gathers both the children of royal families and the children of shelters under the same umbrella. This unit with its well-studied programs has been very useful; it has 35,000 articles written by children for children. Such endeavors seek to protect the young people and generations from invasion by aberrations, misguided and diseased ideas and extremism.

Dr. Abbadi stressed the need to dismantle the powerful slogans and false claims with which ISIS seeks to attract the youth, revealing ISIS’ misguided paths and evil deviations and showing how they are, in fact, mavericks (using the expression of the Prophet) when it comes to matters dealing with major necessities; i.e. preservation of religion, life, intellect, lineage and wealth, all of which ISIS violates, infringes and offends.

The lecturer stated that the Kingdom of Morocco exerts much effort to care for these necessities through enforcing the function of the state and its role to ensure the safety of its people, care for their security and secure and develop the conditions of their life and affairs.

The attendees interacted with valuable interjections and questions that focused on benefitting from the Moroccan experience – and the role of scholars and society at all levels in combating extremism to care for the nation’s youth and prevent them from slipping into the traps of aberration, delusion and fanaticism, through highlighting the authentic structure of their religion’s construction and necessities (as established since the era of prophecy on compassion and beauty, as well as the development of the youth’s capacities’ and investment in righteousness, giving, knowledge and growth).

Among the attendees were scientists, advisors, ambassadors, diplomats, researchers and media figures, including His Eminence Mr Ali Hashemi, Advisor to the President of the United Arab Emirates for Religious and Judicial Affairs; Adam Shahedov, Advisor to the President of Chechnya for Religion Affairs; His Eminence Sheikh Osama Al-Azhari, Advisor to the President of Egypt for Religious Affairs; Dr. Idris al-Fihri, Imam of al-Qarawiyyin Mosque; Dr. Ahmed Mamdouh, Egyptian Dar Al-Ifta; a high-level delegation from the Sufi Complex in Sudan and a number of ambassadors and their deputies, including Mohamed Ait Ali, the Moroccan Ambassador to UAE; Hatem Al Saim, the Tunisian Ambassador; Dr. Aref Nayed, the Libyan Ambassador and Mr. Sayed Abdullah BaAlawy, the Comoros Ambassador, in addition to a number of employees from various research and study centers in the state. Among the interventions that took place in that gathering was initiated by a comment from Dr. Mona Al Bahar, former member of the National Council and Dr. Hessa Lootah, Media Professor at the UAE University.